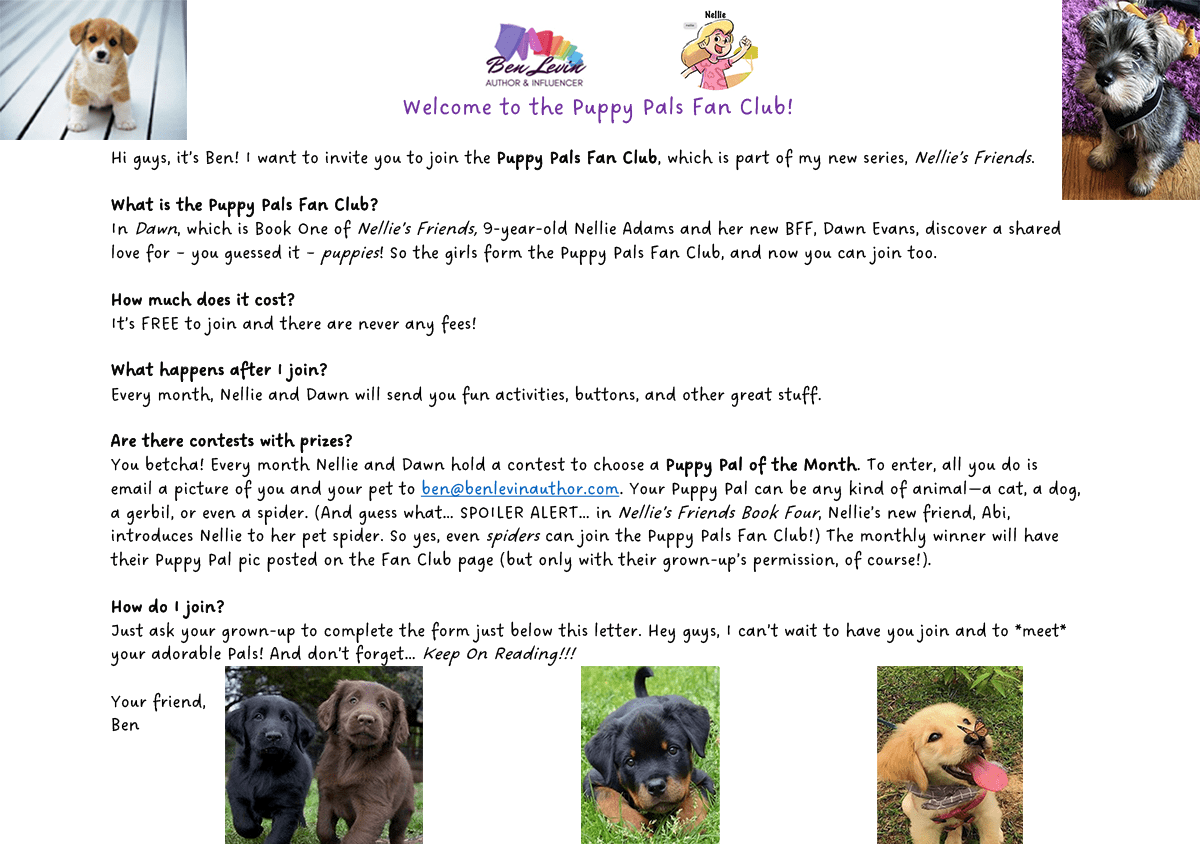 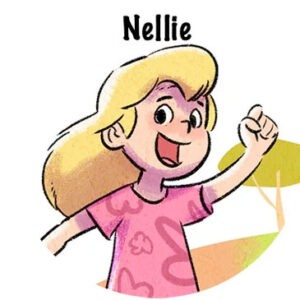 I’m Nellie. My dog is a Jack Russell Terrier, and his name is Tenant!

Nellie is the star of Ben’s Nellie’s Friends series! Nellie moved to Jefferson, Illinois, and decided to make lots of friends. Together with her best friend, Dawn, Nellie started the Puppy Pals Fan Club! 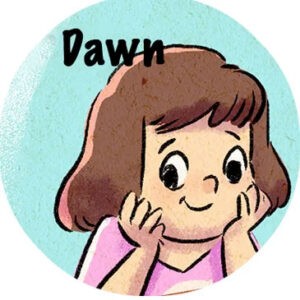 I’m Dawn. My dog is a poodle, and her name is Lilac!

Dawn is Nellie’s first friend in Jefferson. She is Nellie’s best friend and next door neighbor, and together they started the Puppy Pals Fan Club! 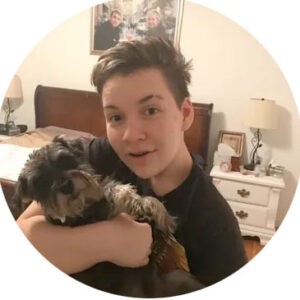 I’m Jake, Ben’s brother, and my dog’s name is Sherlock!

Jake was one of the first members of the Puppy Pals Fan Club. He adopted his puppy Sherlock when Sherlock was just four months old. If you send Nellie and Dawn a picture of you with your dog, or of a dog you like, you can have your picture here too, on the Club’s private page! Email your pic to ben@benlevinauthor.com.

This Month’s Activity from Nellie and Dawn

For everyone who has struggled with a school subject, but then turned it around and done well!

“Can you believe it’s the first day of school, Dawn?” 9-year-old Nellie Adams asked her best friend, Dawn Evans, as they stood in front of their houses. Nellie and Dawn were next-door-neighbors. “I wish we didn’t have to leave our dogs at home, Nellie,”

Dawn replied. Both girls glanced back at their dogs, who were romping around their two respective front yards. “But we’ll always be Puppy Pals,” Nellie added with a bright smile, shaking her head to flick her long blond bangs out of her eyes.

The two girls walked on down their quiet tree-lined street, which was called Carr Avenue. Nellie lived at #18, and Dawn at #20. They had been neighbors since the summer, ever since June when Nellie had moved to the Illinois suburb of Jefferson, all the way from upstate New York. Nellie’s family had moved to Illinois because her father had been offered a job at the bank here in Jefferson. So far Dawn was her only friend. “Nellie, you’ll love our teacher, Miss Lafey [pronounced la-FAY]. She’s very nice and so smart and wears such beautiful dresses!” exclaimed Dawn, as the warm September wind tousled her short dark brown hair.

As the girls climbed the front steps to their red brick elementary school, Dawn led the way to Miss Lafey’s classroom, which held two dozen desks grouped together in pairs facing the blackboard. Through the door, Nellie saw a bunch of kids standing around the desks talking to each other, and figured they were probably catching up about their summer adventures. Then Nellie spotted a tall black woman standing behind a large teacher’s desk in the front of the room, whom she knew must be Miss Lafey. Dawn was right: Miss Lafey was beautiful, with dark brown skin, black hair twisted in an elegant bun, heart-shaped lips, and deep brown eyes.

Miss Lafey noticed Nellie and Dawn and acknowledged the girls from across the room with a nod and a smile. Then Miss Lafey walked gracefully across the room toward the girls. Her blue dress swirled and swished when she walked. When Miss Lafey reached them, the first thing Nellie noticed was that the teacher smelled like the sunflowers in Nellie’s garden back in New York. “Welcome back, Dawn,” exclaimed Miss Lafey in a silvery, sweet-sounding voice . “How was your summer?” “Wonderful!” Dawn exclaimed. “I got an adorable white poodle—her name’s Lilac!” Miss Lafey exclaimed, “Oh my, she sounds adorable! You’ll have to take a picture for me and Alexandra!” “That’s Miss Lafey’s seven-year-old daughter,” Dawn whispered to Nellie. Miss. Lafey continued, “And this must be Nellie!” Nellie gasped, “How did you know?” “Well, you’re the only girl I haven’t seen around the school before. Also, I had tea with Dawn’s mother last week and your mother joined us and you look just like her!” Nellie just smiled, struck by how welcoming and friendly her new teacher was proving to be.

“Let me show you where you girls are sitting,” said Miss Lafey. Nellie just stared at her. Miss Lafey looked like a movie star! Dawn squeezed Nellie’s hand and whispered, “I was really amazed by how pretty Miss Lafey is at first, too. In fact, almost every girl and boy in our class was. But she’s even nicer than she looks, Nellie.”

“Dawn, your desk partner will be Agnes Parsin,” said Ms. Lafey. Dawn groaned out loud. Dawn and Nellie had had many run-ins with mean girl Agnes over the summer. Agnes was pretty and wore the nicest clothes, but she was the most unkind girl ever. “Nellie, your desk partner will be Molly Walker.” “You are so lucky, Nellie!” whispered Dawn. “Molly’s one of the nicest girls in the whole fourth grade!”

A girl with short, curly, brown hair was already at Nellie’s desk. Nellie thought her face was interesting, with vampire-skinny lips offset by kind brown eyes and a sunny smile. In fact she was flashing a huge smile at Nellie right now! “Hi, I’m Molly,” she said. “I’m Nellie,” Nellie replied, smiling back. “I just moved here from New York.” Molly smiled again. “Welcome to Jefferson, Nellie! Have you made any friends yet?” she asked warmly. “Just one so far: Dawn,” replied Nellie. “Ooh! I love Dawn. She’s so fun, and so friendly!” Her eyes darted back and forth as if she had just remembered something. “You’re the new friend Dawn mentioned this summer when we wrote each other letters! She said you’re great! And I’m sure you are, since Dawn has good people sense!” Nellie laughed, “Thanks, Molly. I love Dawn too. She’s my best friend.” The conversation turned to Miss Lafey. “She’s an awesome teacher,” Molly told Nellie. “We’re really lucky.”

Suddenly, Miss Lafey rang a loud bell. “Hello, everyone! I see many kids I know, but I see new faces too. Let’s all plan to have a beautiful year together. The first subject we will be focusing on this year is math.” Several of the children sighed and grumbled, but Miss Lafey smiled brightly. “I hope you’ll come to love math as much as I do. I used to hate it too! Let’s start by testing you on your times tables so we’ll know what to improve first.” Nellie groaned as Miss Lafey passed around a short quiz. “I’m terrible at math, Molly,” Nellie whispered, “Even addition and subtraction!” “I can help you, Nellie,” her new friend offered. “No, I think that’s cheating,” said Nellie. “Oh, I didn’t mean on your quiz! I just meant sometime after school, silly!” Molly explained.

Nellie turned to the quiz. 42 – 6? She thought for a few seconds and then wrote down: “7.” Then she looked at the next problem: 4 + 30. Nellie put down 120, even though she felt a little unsure. It took Nellie 10 minutes to finish her quiz, and a few minutes later, time was up. Their teacher gave back their quizzes a few minutes later, and when she handed Nellie’s to her, Miss Lafey had a concerned looked on her pretty face. Nellie looked down at her paper. She saw a big F with a circle around it. From a few rows behind her, Nellie heard Agnes brag, loudly, “I got 100!” “What a surprise. She’s usually top of every class,” Molly whispered, half disgusted and half irritated. “What grade did you get, Molly?” asked Nellie. “I got a C,” Molly whispered. “How about you, Nellie?” “I’m so embarrassed, but I got an F, Molly,” Nellie replied. “See, I told you I’m terrible at math!” Molly smiled, and then said in the nicest way, “The important thing is that you tried your best, Nellie.”

“Okay, my young friends,” Miss Lafey said, cutting them off, “it’s time for our reading period. For those of you who did well on your math quizzes, well done! And for those of you who have room for improvement, you’re going to have the most fun this semester as you see your work get easier and better.” Nellie wasn’t sure Miss Lafey was right about that. She wasn’t sure at all. 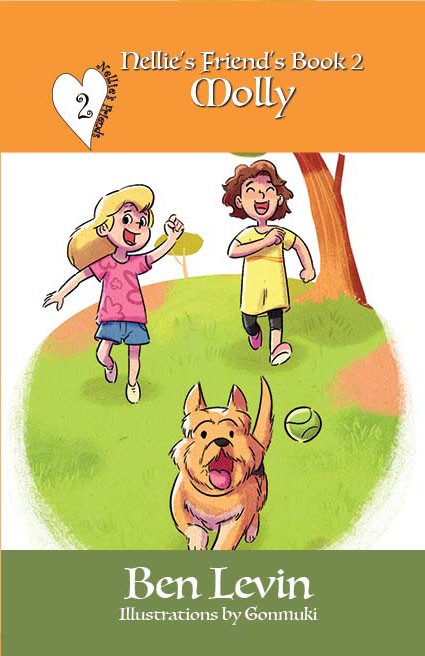 MOLLY will be available from Jumpmaster Press really soon! The link will be posted here AS SOON AS NELLIE’S FRIENDS is launched. There will be a special announcement to our Puppy Pals Members, so make sure to check back here often so you don’t miss it!